If you would like to support this site, please consider Donating.
Useful Temperate Plants 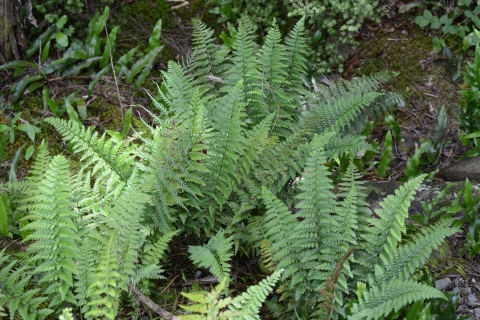 Spores being produced on the underside of the frond
Photograph by: HennaKe

Asplenium bulbiferum is an evergreen ferm with a short, ascending rhizome. It produces a cluster of erect to arching fronds up to 120cm long and 30cm wide. The plant often produces new young plants along the edges of the frond - these drop off naturally and will often root and grow into new plants.
The plant is traditionally harvested from the wild for local use as a food and a medicine. It is grown as an ornamental in gardens.

Although we have found no reports of toxicity for this species, a number of ferns contain carcinogens so some caution is advisable[
200

].
Many ferns also contain thiaminase, an enzyme that robs the body of its vitamin B complex. In small quantities this enzyme will do no harm to people eating an adequate diet that is rich in vitamin B, though large quantities can cause severe health problems. The enzyme is destroyed by heat or thorough drying, so cooking the plant will remove the thiaminase[
172

Terrestrial or epiphytic, growing on riversides in lowland and lower montane forest in New Zealand.

Asplenium bulbiferum is not very frost hardy and will only succeed outdoors in the mildest regions of the temperate zone where frosts are occasional and fairly light. The young growth in spring, even on mature plants, is frost-tender and so it is best to grow the plants in a position sheltered from the early morning sun[
K

Title
Plants for a Future
Author
Ken Fern
Description
Notes from observations, tasting etc at Plants For A Future and on field trips.

].
Requires a moist humus-rich soil in semi-shade.
Members of this genus are rarely if ever troubled by browsing deer[
233

Title
Cornucopia - A Source Book of Edible Plants.
Publication
Author
Facciola. S.
Publisher
Kampong Publications
Year
1990
ISBN
0-9628087-0-9
Description
Excellent. Contains a very wide range of conventional and unconventional food plants (including tropical) and where they can be obtained (mainly N. American nurseries but also research institutes and a lot of other nurseries from around the world.

], they have the tenderness and the taste somewhat like a slightly bitter asparagus[
292

]. The young fronds were sometimes cooked by the Maori and left in water for about two weeks, by which time they had acquired an acid taste. The taste was like that of tinned asparagus, slightly acid, and it was considered a great luxury[
292

].
A wash obtained from the root is used as a treatment for sore eyes[
292

Spores - best sown as soon as they are ripe on the surface of a humus-rich sterilized soil. Keep the compost moist, preferably by putting a plastic bag over the pot. Germinates in spring[
1

Title
RHS Dictionary of Plants plus Supplement. 1956
Publication
Author
F. Chittendon.
Publisher
Oxford University Press
Year
1951
ISBN
-
Description
Comprehensive listing of species and how to grow them. Somewhat outdated, it has been replaced in 1992 by a new dictionary (see [200]).

]. Pot on small clumps of plantlets as soon as they are large enough to handle and grow them on in light shade in a cold frame or greenhouse. Keep them humid until they are well established. When they are at least 15cm tall, plant them out into their permanent positions in late spring or early summer.
This plant can also be propagated by means of small bulblets that form on the sides of leaves in the growing season. Pot these bulblets up when they detach easily from the parent plant and grow on in the greenhouse for at least the first winter.

If you have any useful information about this plant, please leave a comment. Comments have to be approved before they are shown here.